Virtuoso violinist with an open mind, Miri Ben-Ari contributed to give a warm organic sound to Kanye West’s College Dropout. We talked to her about her unique journey into music.

You can find this interview translated in french here.

With her slender frame leaning on her instrument and her cascade of bouncing curls, Miri Ben-Ari stood out in the rap landscape of the early 2000’s. Coming from Israel, this classicaly trained violinist went to New York to learn jazz music. There, she heard « One More Chance » by Notorious B.I.G. for the first time, and she got to know a whole different world. She took gigs and soon became herself a « college dropout ». Discovered by Wyclef Jean, Jay-Z and then Kanye West, we can hear her nervous playing style on many tracks produced by the Chicagoan. This era marked a crucial step in her career as the « hip-hop violinist ». She even won a Grammy Award for a contribution to « Jesus Walks ». At that time, soulful sound was trending and Miri’s live strings were perfect to give more depht and richness to the productions she was featured on. She quickly became a prominent musician and released in 2005 her own album packed with renowned artists, a unique mix of violin, rap and r&b. Since then, she explored other genres and countries, bringing together different cultural horizons through her instrument. We asked her about her atypical path and her vision of music.

Abcdr du Son : What artists did you grow up listening to? What kind of music was playing in your home back then, in Israel?

Miri Ben-Ari : I grew up in classical music, my parents were listening to classical music all day, especially operas. When I was a teen I discovered Jaz music and it changed my life.

A: The first solo albums you released were jazz albums. What jazz musicians inspired you the most?

M: I fell in love with Jazz through Charlie Parker, the first Jazz song I ever listened to was « The song is you » and I knew right there that I was embarking on a new journey. I still think Bird is that perfect improvisation, almost classical but with wings. He flies and I wanted to fly too which is why I moved to the US to study Jazz. This year we lost Chick Corea, a legend, I got to perform « Spain » with him, an unforgettable experience. I had the privilege of touring and performing with some of the best Jazz musicians such as Wynton Marsalis, Billy Hart, and David Kikovski. I would never be the artist I am today without this experience.

A: In 2001, you played the string section on « Fallin » by Alicia Keys, which became a huge hit. Do you remember working on that song?

M: Of course! Alicia called me on my cell and asked me to help her out with the album she was working on (Songs in A Minor). We met in my car, Alicia had an album demo of a few unfinished songs and we listened to it together. One of them was Fallin, it was a demo version but I felt the vibe. Alicia said that she already recorded strings but doesn’t like the way it came out. She asked me to replace them. We went to the studio, and I wrote and recorded all the strings parts on the spot, you can also hear my violin solo at the end of the song. The strings gave Fallin’ that soulful back in the day R&B sound, I am very grateful I had the opportunity to record, write, and be a part of this classic record. It also led to recording and producing the song Mr. Man, also on Songs in A Minor.

A: You made quite an impression with your live performances at the Apollo (and many more since then) where you played over a medley of hip-hop beats. Did these shows open doors for you?

M: Yes! this was my « break ». The first show ever of « The Hip Hop Violinist » and since it was televised it made a lot of noise. I was invited to perform on 106 & Park (twice) discovered by Jay-Z and then Kanye West.

A: You’re credited on seven tracks of The College Dropout and we can hear your violin on many productions Kanye West did since 2004 for other artists. You helped him shape that lush orchestral sound, heavy on the soul samples, that was his trademark for a while. How did you connect with him and what was your work process in the studio?

M: Kanye saw me perform with Jay Z (I think it was Summer Jam). I worked with him on his album and many other songs. It is still my favorite sound of Kanye.

A: You particularly shined on « The New Workout Plan ». Was that beat composed around an original riff of yours?

M: That song was actually supposed to be on my album at some point! we recorded it together at Kanye’s apartment in NJ. We had to improvise the setup, I remember the cord that connected me to the board was too short, and I had to keep stepping on it so it doesn’t get in Kanye’s face. Funny memories!

A: In the yearbook inside the booklet of The College Dropout, you are nicknamed the « token white girl ». How did you fit among these artists mostly from hip-hop?

M: This is so Kanye!:) How did I fit? I am from Israel, I came to the US after serving two years in the military. Israel is not an easy place, and socially I always struggled to fit in. Hip Hop was actually the first time in my life I felt belong and understood. I loved working with Kanye and everyone that was involved with his project.

A: In a sense, you and John Legend were Kanye West’s band in the studio and on stage during that era. You also appeared on John’s first solo album (on the great « Live It Up »). How did it go with John?

M: It was great. John used to practice his songs backstage on Kanye’s shows, what a treat! We had a swap: I recorded for John’s album and Joh recorded for my album The Hip Hop Violinist. I love his chorus on my song « New World Symphony »  ft Pharoahe Monch, it also featured on the soundtrack of Fantastic Four.  I created this song with Kanye based on « New World Symphony » by Dvořák.

A: Another classic that put you on the map was « Overnight Celebrity » by Twista, in 2004.

M: « Overnight Celebrity » was my first commercial feature on both sound recording and music video. It was the first Hip Hop song ever to feature a violinist. History in the making. This song’s title should have featured me but because it was not customary at the time to feature an instrumentalist on a commercial song it did not happen. I was able to change this during the course of my career which is one of my contributions to the music world.

A: In 2005, you went on to release your own album, The Hip-Hop Violinist, stacked with high-profile guests like Scarface, Lil Wayne, Styles P… How did you put it together and what do you think of that album now?

M: This album is still a classic. It was so ahead of its time, even today! It created a sub-genre within the Hip Hop genre, it paved a path for so many musicians. It inspired people and especially kids to pick up musical instruments and made the violin « cool » again.

A: On « We Gonna Win », the main single of the album, you interpolate a portion of « The 1812 Overture » by Tchaïkovski. Do you often use classical riffs as a starting point and then expand them with a hip-hop groove?

M: That was my brother’s idea, Ohad Ben-Ari, a concert pianist and composer, who lives in Berlin now. This song, in my opinion, is the ultimate combination of Hip Hop production, violin, and lyrics by Styles P lyrics. Every song has its own unique approach, there is no « one way » to produce a song.

A: Of all the songs you are featured on, which one is your favorite and why?

M: That would be « Symphony of Brotherhood » my original composition featuring Dr. Martin Luther King Jr. For many reasons: the timeless message, the impact it created, and by introducing this R&B ballad sound played by violin, like a soulful soundtrack to MLK powerful words. This song has won many awards, I performed it both in the White House for the Obamas and also for Israeli president Shimon Peres. I think this song will outlive me and its message will always be relevant. I grew up Jewish, a third-generation to Holocaust survivors, I know about racism and the need for tolerance in our world, which is why I am dedicated to bringing harmony with my music. 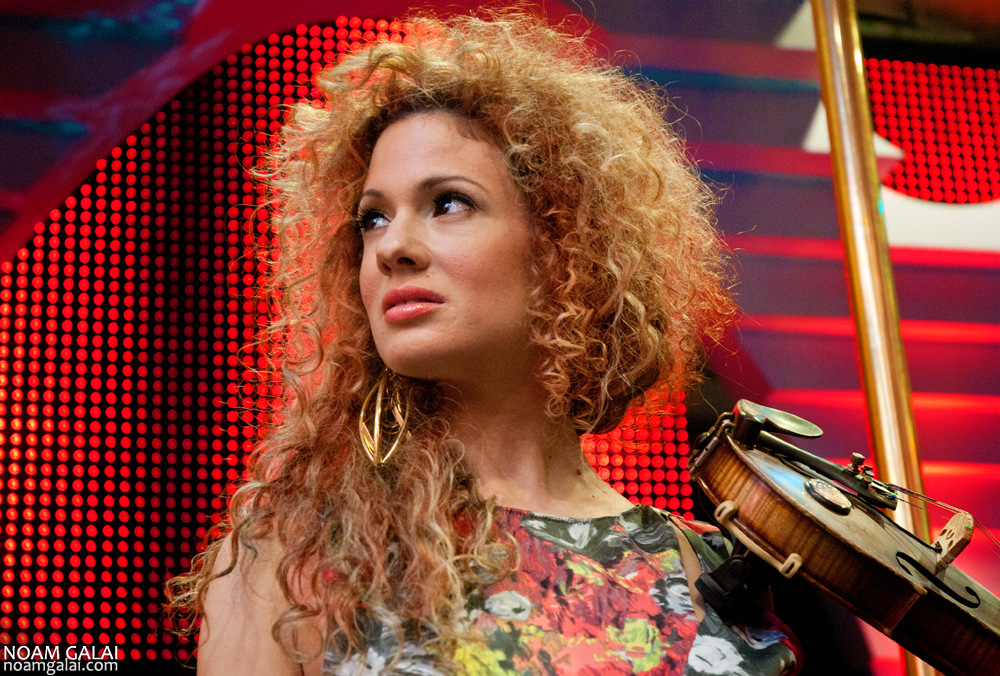 After her breakthrough in hip-hop during the 2000’s, Miri Ben-Ari ventured into unexpected genres. She worked with dutch DJ Armin van Buuren, trance pioneer, for his track « Intense » in 2013. She also worked with Aventura, a bachata band from Bronx who had a huge success (most notably with « Obsesion »). We can hear Miri’s partially improvised performance on the live rendition of « Jose », recorded at the Madison Square Garden. More recently, she collaborated with Diamond Platnumz, a tanzanian pop singer, on « Baila », a ballad with a middle eastern vibe. Between these songs and her rap years, Miri built herself as the ambassador of violin in genres where it didn’t really exist before.

A: According to you, what’s your biggest contribution to the music world?

M: I paved the way for musical instruments to come to the frontline in commercial music, collaborate, and being featured by artists. I am still fighting for musicians’ rights, especially when it comes to publishing. We have a broken industry that must become transparent and allow musicians to claim their rights and yes strings arrangement should be considered as writing.

A: A broken industry… can you elaborate?

M: The digital evolution has created many producers, especially in Hip Hop music, that are great programmers, but not necessarily musicians. You don’t need to be a musician in order to program a beat of 2-4 or 8 bars loop. Since there are so many amazing plugins with libraries of sounds and samples, live musicians are not even needed that much anymore. When instrumentalists are hired for a session in pop music, they either wave their rights or have no idea how to claim their rights to begin with. There are many records with live musicians that could have claimed royalties but didn’t, simply because they did not know how. Strings players got the worst deal: there is the term « strings arrangement » from back in the day, before the digital era, and because of the word « arrangement » it is almost impossible for strings players who wrote their parts in a commercial sessions to claim publishing. The industry considers it automatically as « strings arrangements » which is wrong. Being a producer myself and understanding how the industry works, I hope to change this for my fellow musicians.

A: You’ve kept exploring other genres since then. What motivates you to try new things and what are your next projects?

M: I love crossing over with my music to places I could not possibly reach otherwise. It allows me to understand, relate, and connect with other cultures, countries, and people from all over the world and create harmony. My new project Afrostringz is another multicultural experience. We are constantly releasing new music. I am starting to get my performances back now that the market is opening up and I hope to be touring again real soon.

Check out our playlist dedicated to Miri Ben-Ari on Spotify.